Since moving to New York City in 1994 he has garnered critical acclaim both as a Jazz and World Music performer and as a Music Producer and Arranger.

Born in Gibraltar, a small British colony on the southernmost tip of Andalucia Spain, Elie began learning guitar with his father Mesod at a very young age. Elie’s dad studied Flamenco and Classical Guitar with one of Francisco Tarrega’s students in Spain as a young man and introduced Elie to a variety of styles including Flamenco, Classical, popular Jazz and Country and Western song. At age 11 Elie began Classical guitar studies with Gibraltar’s leading Classical guitarist William Gomez who took Elie under his wing.

Described by Jon Anders of Downbeat Magazine as a guitarist who’s ‘textures and effects recall stylists as diverse as Bill Frisell, John Abercrombie and Bern Nix,’ … aside from Jazz, Elie’s broad stylistic pallet also embraces his Sefardic heritage together with World and Folk musics of the Middle East, South America, North America and the British Isles.
Stuart Boomer of Cadence Magazine writes; ‘Massias has a command of the guitar that extends from the fingerboard to the amplifier, from the lightest acoustic play to R&B”

Upon completing high school Elie moved to Israel and was offered a scholarship to study at the renowned Jerusalem Academy of Music under the tutelage of Eastern European Maestros Vladimir Shkolnik, Nachum Perpekovich, Avner Strauss and Gil Dor. The intense studies at the Academy led to another scholarship offer to attend the Berklee College of Music in Boston Massachusetts where In 1991 Elie graduated from the Film Scoring department.

“Elie illuminates audiences with the beauty and intricacies of Jazz, Flamenco, Middle Eastern, Sephardic and rock music that he grew up with. During his live performances, Elie sings and plays acoustic and electric guitar, soprano saxophone and Wavedrum while using a sampler to create loops in real-time. drawing from his experiences living in Israel, Europe and the US, Elie effortlessly unifies these vast musical genres”
The Wandering Muse Project

Through years of composing, recording and performing, Elie has developed his own unique sound and style. His music meanders and celebrates the many sounds that emanate from the vistas….lone ships crossing the straits of Gibraltar into the mediterranean sea, the majestic views of North Africa from the top of the Rock of Gibraltar, vacations in Morocco as a child, the deep British music influence on the colony, the effortless fusion of sefardic cantorial ladino musings with flamenco guitar and cante hondo, the years of living, traveling and performing in Europe, the U.S., North Africa and Israel, his deep love and commitment to Jazz and improvised music …. all these melt into Elie’s individual music pot to create an art that is all at once personal, subtle, eloquent and above all beautiful.

Gibraltar-born Elie Massias also wowed the audience when he took to the stage at his birthplace.
He played multiple instruments on stage and switched between them with such sophistication that he – as all the greats manage to – made it look easy.
He interjected the instrumental jazz with vocals (some scat singing), played guitar, soprano saxophone and the piano.
http://www.theolivepress.es/spain-news/2012/07/02/review-international-jazz-festival-gibraltar/

Tabletmag.com / Alexander Gelfand of Tablet Magazine describes Elie’s performance at The New York Sefardic Music Festival; “Massias recast several traditional songs, including a fragment from Psalms and a segment of the grace after meals, as simple vamps decorated with beautifully improvised melodies, limpid chords and flamenco licks; and he thickened the texture by looping his own guitar accompaniment in order to add layers of additional melody and rhythm, and occasionally Elie Massias picking up a soprano saxophone or drumming on a cajon. He sang in a mixture of Hebrew and the Gibraltar variant of Ladino, or Judeo-Spanish; but he sometimes simply scatted along with his own instrumental improvisations, in a voice that was alternately breathy and keening.
Massias reminded me of the Benin-born jazz guitarist Lionel Loueke. Like Loueke, Massias has forged something new and distinctive from the music he grew up with. But while Loueke has fused traditional West African palmwine guitar with jazz and electronic effects, Massias draws upon the unique musical culture of his native Gibraltar—a culture that was influenced by both Spain and Morocco. (Like those of many Gibraltan Jews, Massias’ ancestors came from Tetuan, a Moroccan port city to which large numbers of Iberian Jews fled following their expulsion from Spain in 1492.) Other Sephardic performers have engaged in similar projects—Sarah Aroeste and Pharaoh’s Daughter both come to mind—but few have conveyed such a profound sense of spontaneity and freshness”.

ENJOY THE MUSIC ON THIS SITE WITH GOOD HEADPHONES AND SPEAKERS 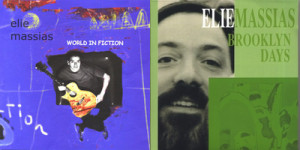